I had my family and friends birthday parties this weekend! We went rock climbing. I had so much fun!

END_OF_DOCUMENT_TOKEN_TO_BE_REPLACED

We went skating at school this week and I went to a London Knights hockey game with Daddy!

END_OF_DOCUMENT_TOKEN_TO_BE_REPLACED

I was back to school this week which is good cause I really missed my friends!
END_OF_DOCUMENT_TOKEN_TO_BE_REPLACED

Marshall, Aunt Charlie and Uncle Todd got to have a sleepover at my house! And I got to play with my cousins Rory & Caleigh on the Fox farm!

END_OF_DOCUMENT_TOKEN_TO_BE_REPLACED

I got the American Girl Doll I wanted for-like-ever from Santa Claus!! Her name is Kit and I love her!

END_OF_DOCUMENT_TOKEN_TO_BE_REPLACED

We went to Toronto and I got to have a sleepover with Marshall, Uncle Todd and Aunt Charlie!

END_OF_DOCUMENT_TOKEN_TO_BE_REPLACED 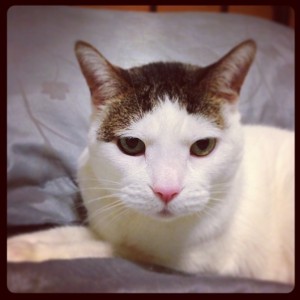 For some time now we have known that our feline friend Skylar was approaching the end of her journey in life. For the past year her health has been in decline—her back end being the most obvious barometer of that. She had been walking more sideways than straight and needed help getting up into our bed, something which she demanded by meows, repeatedly every night and multiple times throughout the night even. Pretty much the last six months of her life were spent between the bed she had under our bed, our bed, the litter box, and her food tray—a world that spanned about seven feet, square.

Both Danielle and I were well aware that we were going to be making that final trip to the vet more sooner than later. But we kept a simple concept as our guidance to when that time was drawing nigh: As long as Skylar was eating, using the litter and not in any sudden and urgent state of decline, we’d leave her be. And for the better part of eight months, that was a working framework for Skylar and us.

But in the last week I’d even noticed even a more pronounced decline and her meows which were already noticeably old and worn out sounding, had become somewhat desperate and painful. Her normal evening routine of meowing at the top of the stairs at 10:00pm when she deemed it was our bed time on both Wednesday and Thursday evening sounded different. Both nights she was a lot more persistent and didn’t really stop once we got upstairs.

Shortly, after we got to bed Thursday night, and got Skylar up in ours as part of her usual routine, the very pained and laboured sounding cries started. And didn’t stop. We couldn’t comfort Skylar really in any way, and she pretty much just flopped on her side and lied there, wailing. That conversation we were dreading, suddenly was jettisoned to the here and now and Danielle and I started mapping out how we were going to handle the trip to the vet…

The most tragic part of all of it was Emelia was in bed and asleep. We didn’t want to wake her to have her last goodbye be a memory of Skylar in that much pain, wailing away. But even more challenging was that with Emelia in bed, one of us would have to make the trip to the vet solo, and the other had to stay back and miss out on those last moments and a proper goodbye.

There was no question in Danielle’s mind, she was going. Skylar was her cat afterall. And that was that. I got a bit of a snuggle with her and then, I helped Danielle load up Skylar for the trip to the after hours vet at 12:45am Thursday morning. That was it, we were saying goodbye to our runt, who was definitely the most unique cat I have ever known. The next couple of hours were raw, confusing and painful for us. Neither Danielle nor I got much of what I would call rest that night—Danielle even more so than I.

Who she was to us will be less about this painful and very current memory and more about the extremely eccentric (even for a cat) and out of the box cat she was. She was eighteen years old and to be honest shouldn’t lived past day one. She was born dead, and our friend Kari at the time a Vet Tech bought her back to life with a shot of Epinephrine only to have her mother reject her after birth. Kari, and then we weened Skylar from eyedroppers of milk and she was so small when we got her, she could fit in a coffee mug.

She always from day one had a connection and rapport with Danielle. Almost if she knew I was more of a dog person, she and I – for many, many years – didn’t see eye to eye. Which was fine by me, because I had Clifford our dog. The fact that she never ran with a proper litter mate, and learned more from Clifford definitely contributed to her special ways… like standing on her back legs with her paws up like a dog and panting too.

After Emelia arrived on the scene, Skylar definitely warmed up to me (and by that I mean a more cold than warm) and became ultimately indifferent to Emelia. She never was much of a snuggly cat and basically spent time that when anyone came over find spots in the house to disappear to.

She definitely had a hard time adjusting to a house left emptier when we had to put our dog Clifford down for the same old age, and would often break our hearts a bit as she patrolled the house looking for her buddy. But as time wore on, she definitely relished having the house and family as her property.

I am definitely missing her around the house, and I know Danielle is feeling that loss greatly too. But, I know  deep down we made the right decision, at the right time before letting it go too much longer and see her in more significant pain and distress.

Skylar, you’re gone, and we’ll miss you for sure, but you certainly won’t be forgotten. It’s hard to do that with a cat as unique and endearing as you could be!

We had a Christmas Movie Night at the School Friday and I got to go with my friends and stay up too late!

END_OF_DOCUMENT_TOKEN_TO_BE_REPLACED

I got to stay up really late at Uncle Matthew and Uncle Shawn’s wedding. I had so much fun with my cousin Brooklyn. END_OF_DOCUMENT_TOKEN_TO_BE_REPLACED

I finally did a chin-up, pullover on the bars at gymnastics!!